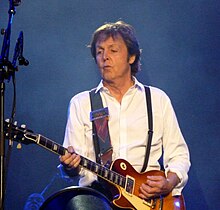 The
Paul McCartney Archive Collection
is an ongoing projection to remaster and reissue Paul McCartney’s solo catalogue, including various albums released with Wings. These editions characteristic deluxe packaging and bonus rare tracks.[1]
Thus far, at that place have been fourteen releases since the projection began in 2010 (vii solo albums, six Wings albums, and i new Wings live album of previously unreleased material).[ii]
They are overseen past McCartney himself and remastered at Abbey Road Studios.[3]
Albums reissued in this project are visually marked by a white stripe forth the left side of the album cover that reads “Paul McCartney Archive Collection” and a copy of McCartney’south signature.

The albums are typically released in a variety of formats: a “standard” edition that contains the original album digitally remastered on one CD; a “special” edition which contains boosted discs of bonus tracks; and a “deluxe” edition which comes with extra features like bonus CDs or DVDs of unreleased cloth packaged in a hard-bound book. Some releases contain booklets, rare photos, interviews, artwork, promotional video clips, or documentaries. The “special” editions of the albums were as well released as double LPs on 180 gram “audiophile vinyl”, with the original anthology on one tape and bonus material on the second. The records also came with a download menu for MP3 versions of all tracks included. The special editions of the albums are bachelor on streaming services worldwide.[1]

The project has as well inspired a fan-driven project, chosen the “Ultimate Annal Collection”, which has collected a greater number of McCartney and Wings albums, including bootlegs and unofficial albums. This was created as a response to the dissatisfaction among some fans at the slow rate of releases, as well as the perceived depression number of bonus tracks included with each album.[4]


Beneath is a listing of albums that take been reissued then far. Paul McCartney has stated that
Back to the Egg
and
London Town
are slated for an upcoming release.[v]